Home / THE OCHER MASSIF / THE MINES OF BRUOUX
-A +A

Unique in the world, dozens kilometers of galleries. A majestic site where to discover the ocher extraction work

Visit the former "Bruoux ocher mines" open to the public.

A course of 650 meters has been built safely in this majestic site, combining natural and historical wealth. Impressive galleries, vaulted, lancet-shaped or even semicircular, up to 15 meters high form a genuine mineral cathedral: an immersion into the aesthetic world of ocher, that pays tribute to the work of the ocher miners, diggers of colours.

Outside: large esplanade, a garden and walking trails. The reception building integrates harmoniously with the site. An open-air theater in front of the cliff hosts summer events in an exceptional environment.

A guided tour to discover the history of ocher miners

At the end of the 19th century, the ocher economy was thriving in Gargas: the quality of yellow ocher extracted in galleries was much higher than that of the other sites. Therefore, despite the dangers and difficulties of exploitation, the ocher mines expanded. From 1880 to 1950, more than 40km of galleries were shaped, carved in the cliffs in the light of the carbide lamp, pickaxe in hand. Today, the last working ocher quarry in Europe is still located in Gargas. However, today, the Société des Ocres de France extracts ocher in the open. 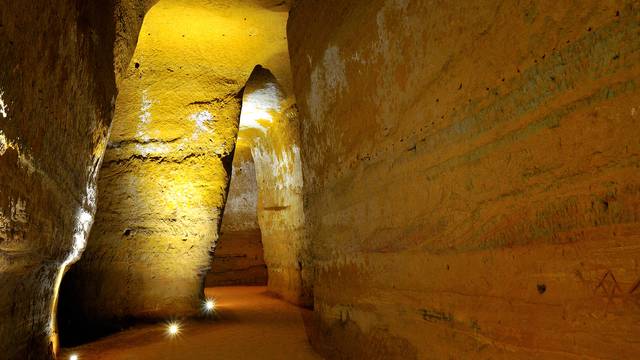 TO VISIT THE MINES OF BRUOUX